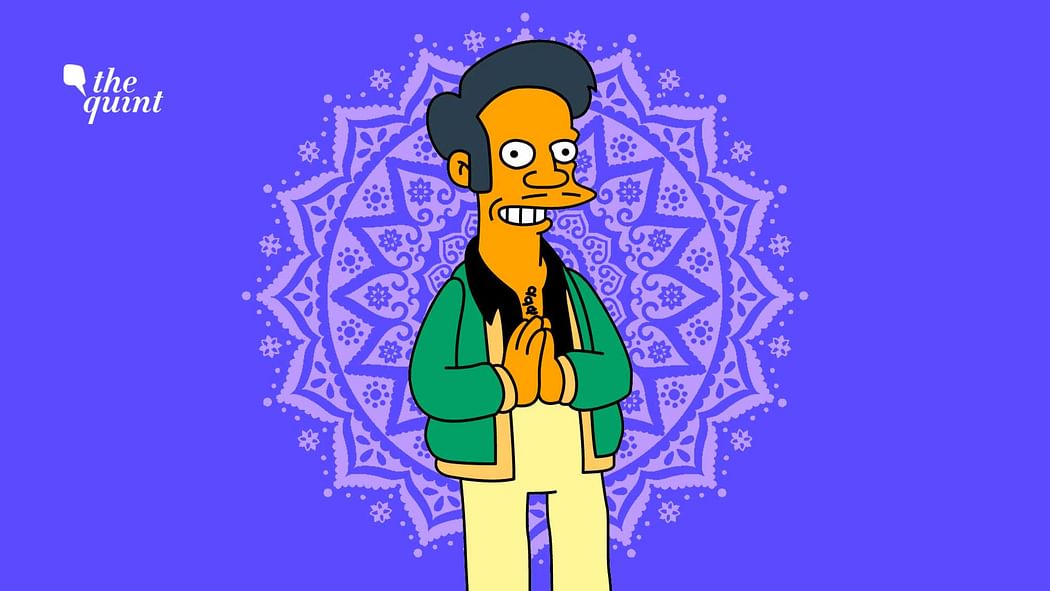 Earlier this week, Hank Azaria apologized for lending his voice to the character of Apu in The Simpsons. The American actor, who had voiced the role of the Indian-American character for three decades, stood down in 2020 amidst fervent criticism of racial stereotyping.

During the 90s, at a time when South Asian representation was still mostly absent from the Hollywood zeitgeist, The Simpsons, the widely loved animated sitcom which shot its 32nd season last year, introduced Apu Nahasapeemapetilon in their pilot season.

An immigrant from West Bengal, Apu was unmistakably different from the other residents of Springfield, the fictional town where the show is set. In a sea of yellow faces, Apu had orange skin, a complicated last name, and was the owner and manager of the Kwik-E-Mart, a convenience store.

However, his most distinguished trait and one that capitalised off his ethnicity most explicitly was his unfailingly exaggerated Indian accent.

With a definitive curl to all his R’s, Apu’s character held a PhD and yet, was running a convenience store.

In his apology, Azaria admitted to the cartoon’s subliminal contribution towards perpetuating cliches centred around South Asian immigrants, and recognised that Apu had “become a slur” in American communities.

Speaking on the Armchair Expert podcast, hosted by actors Dax Shepard and Monica Padman, Azaria said, “Just because there were good intentions, it doesn’t mean there weren’t real, negative consequences to the thing that I am accountable for.”

To some, ‘real, negative consequences’ can sound like an overstatement. In a world where South Asian representation was not nuanced in mainstream media, and characters that racially stereotyped Asians mostly went unchallenged – think Peter Sellers’ brown-faced Indian interloper in the famous comedy The Party – Apu seems like a slight transgression.

However, in 2017, the character came under intense scrutiny when it became the subject of Indian American comedian Hari Kondabolu’s critique in a documentary titled The Problem With Apu.

Most South Asian actors agreed in the film that they had been damaged by Apu in some way. Many were often asked to put on “the Apu accent” during auditions, they revealed. In a short yet insightful statement, actor Utkarsh Ambudkar said, “We didn’t have any other representation in this country. That creates a problem when the most popular show on television is showing mainstream America what an Indian is.”

When the only portrayal of the Indian identity present in the western cultural consciousness is of a character with a carelessly characterized accent and cliched story arcs, it encourages a deeply prejudiced way of perceiving the world.

In an early scene in the documentary, we even see a heckler shouting Apu’s catchphrase – “Thank you, come again” – after one of Kondabolu’s comedy bits at a club. “You’re the reason I do comedy, Sir,” Kondabolu snaps. “You’re the reason I thought to myself, nobody like us exists, except this cartoon character.” 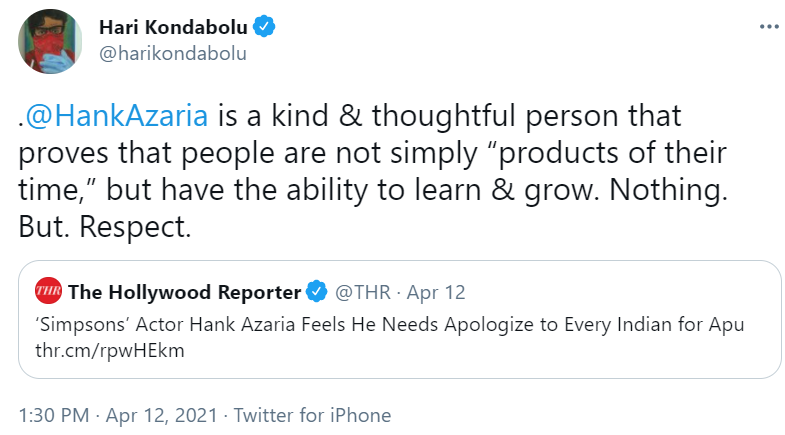 A broader reckoning, of course, comes when you recognise that the idea of an “Indian accent” is in itself a myth, as India is not a linguistically homogenous entity, and constitutes hundreds of spoken languages.

In an article in The Verge, journalist Shannon Liao writes, “Apu’s origins are blurry, lending the character a monolithic quality and a sense that the writers really didn’t care about getting his heritage right; Apu is at times Bengali, South Indian, possibly Tamil, and Kannadiga.”

Apu’s portrayal also lends itself to the broader discourse around race, representation, and often the lack thereof of minority communities in visual media. Culture editor Saumya Kalia notes in The Swaddle that many have dismissed this effort towards representation and authenticity in popular media as a ‘trend’, a mere side-effect of the emergence of the “politically correct” bandwagon.

But, can the need for inclusivity and representation ever be short-lived? Kondabolu’s another tweet in response to Azaria’s apology answers this question.

In a society which has prejudice towards immigrant communities peddled by people and institutions in power – from former US President Donald Trump’s ‘Muslim ban’ to his promises of ‘building a wall’ – art and popular culture is the one sphere through which you can give the disenfranchised communities in the western world their voice back – literally, in Apu’s case.

In June of 2020, creators of The Simpsons announced they would no longer employ white actors to voice non-white characters. However, it was never really just about Azaria voicing a brown character. It was about what Apu had come to stand for in society. A few years ago, in an interview with Huffpost, Kondabolu had said, “He’s a very interesting reminder, in some ways. You can always see where we were.”