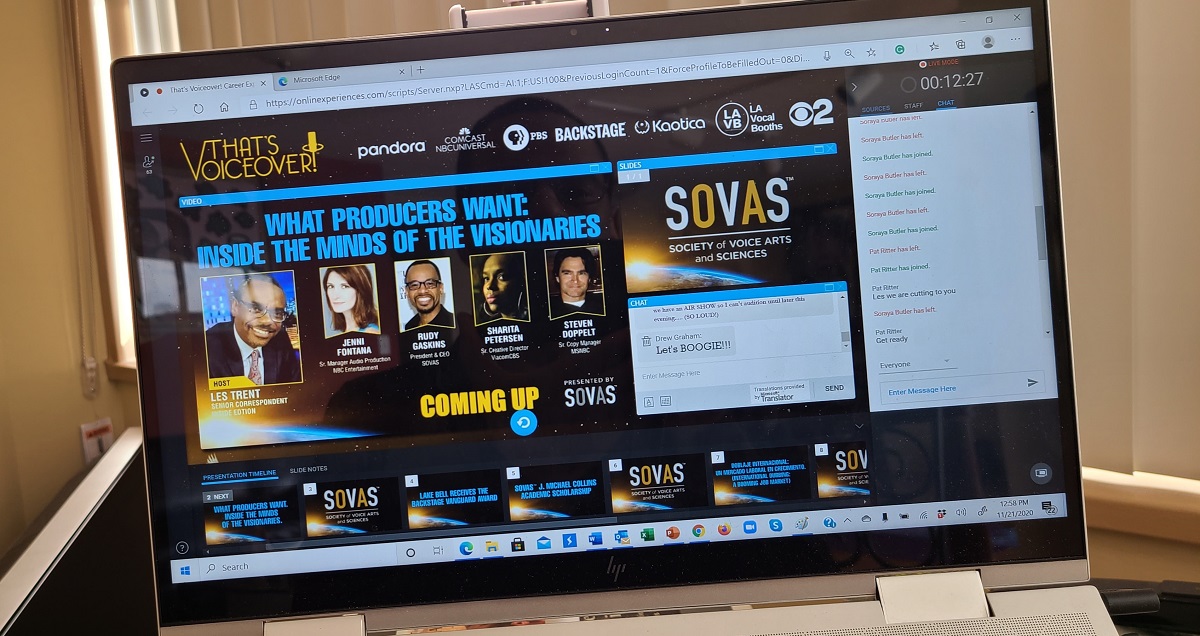 When it became clear last spring that COVID-19 wasn’t going away quickly, the wheels at SOVAS began to turn.  What if That’s Voiceover!, the annual career expo that offers a wealth of networking, educational, and employment opportunities, could become a virtual event?  In the true spirit of “the show must go on,” planning began in May, re-envisioning TVO! as a global event, broadcast in English and Spanish and accessible to anyone with an internet connection.

After months of preparation and work, and with the help of the technical team at Meeting Tomorrow, That’s Voiceover! went live on Friday, November 20th with the indomitable Scott Parkin as MC and host of the event’s first panel, Booking Work: Follow the Science.  Scott and his fellow panelists, Joy Johnson-Williams, Jill Kershaw, Paul Doherty, and Marc Guss wasted no time in getting down to brass tacks: how can voice actors tackle auditions and demo submissions in the changed, post-COVID landscape?  It was to be a theme that was touched on in almost every panel: how do voice actors regain their footing and keep it in an isolated world that’s now requiring them to become their own audio engineers, recording in solitude, trying to nail a performance while taking direction via Zoom?

The next panel, Acting for Voice Actors, hosted by Marc Preston, delivered another lineup of heavy hitters dispensing invaluable advice to VO veterans and newcomers alike.  Legendary coaches Tim McNeil, Caymichael Patten, Matthew Corozine, Penny Templeton, and Pat Fraley spoke about the importance of training and keeping your instrument in tune, reiterating that even at the pinnacles of their celebrated careers, accomplished actors such as Leonardo DiCaprio and Meryl Streep still work with coaches to help them hone their performances to perfection.  After this illuminating panel, John Jack Rodgers of the Stella Adler Academy of Acting and Theater joined the event to present two scholarships.  Winners Mariana Baggio Thomaz and John Meissner will receive three semesters of training at Stella Adler, studying their craft in online courses designed to elevate their game, even when learning remotely.

The next panel, The Collapse of Colorblind Casting, hosted by Roger Gehrmann of Pandora, was a frank and necessary discussion of the issues facing voice actors of color.  Though many beloved animated shows are listening to performers and viewers alike and heeding the call to allow performers of color to voice characters of color, there is still work to be done in the industry.  January LaVoy, Leon Nixon, Scott Brick, and Rene Ruiz spoke powerfully on their experiences in a moving and thought-provoking hour. 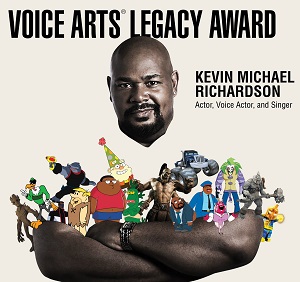 For the Voice Arts Legacy Award, presenter Tom Ruegger tossed aside the work-from-home sweats in favor of an actual tuxedo!  The Animaniacs and Freakazoid creator was on hand to present the incomparable Kevin Michael Richardson with the Legacy Award in honor of his lifetime of outstanding work in the voice arts.  Home audiences were treated to a highlight reel featuring some of Richardson’s most beloved characters, including Cleveland Brown Jr., Principal Lewis, Captain Gantu, his Emmy-nominated take on The Joker, and, as a bonus, Kevin’s incredible singing voice.  Via live chat, the home audience was able to express an outpouring of love and respect for Kevin’s work – and while a text version of a standing O isn’t as loud, it was just as filled with gratitude and appreciation!  In conversation, Tom and Kevin reminisced, and Kevin treated the audience to his hilarious and dead-on interpretations of his early hero, Flip Wilson, as well as some of his favorite personalities, Tracy Morgan and William Shatner.

Day One drew to a close with Steve Pogatch and David Cuetter of Pandora, who discussed the Pandora brand and, with the help of voice actors Portia Cue, Tomas Mackey, Tom Antonellis, and Valentina Latyna, gave live audition training.  From there, the festivities concluded with a special Zoomcast edition of The State of VO, hosted by Joan Baker and Marc Guss, and featuring the entire SOVAS board, as well as a special performance by Orfeh.  It was enlightening to hear so many different perspectives on the state of the VO world. 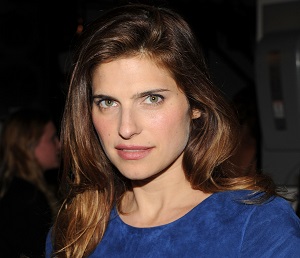 Day Two hit the ground running with MC Les Trent hosting the What Producers Want panel with Jenni Fontana of NBC, Steven Doppelt of MSNBC, and SOVAS’ own Rudy Gaskins weighing in on what producers are looking for from voice actors today.  The presentation of the Backstage Vanguard Award was up next, with Joe Cipriano joining the event to honor the iconoclastic Lake Bell.  From her early struggles to Sundance success, Lake wowed the crowd, sharing her triumphs and words of encouragement.  Following the Vanguard Award, J. Michael Collins joined the event to present the J. Michael Collins Scholarship to Soraya Butler.  We congratulate Soraya and look forward to great things from her!

The International Dubbing panel, hosted by Natalia Rosminati, featured an in-depth conversation with some of the most outstanding talents in the game from around the world: Lorenzo Beteta, Andrea Nieto, Ricardo Tejedo, and Deborah Wexler.  And Joan Baker’s VO Titans of the Universe panel brought more invaluable industry wisdom from a panel of, well, titans of VO!  Alex Desert, Kari Wahlgren, Jennifer Hale, and Reno Wilson shared the secrets of their success, as well as teaching the audience about…oil pulling?  Hey, whatever works!

Day Two ended with the CBS Audition Spotlight, which kept the audience (and, to be honest, SOVAS staff alike!) on pins and needles, anxious to see who would win.  Marc Guss of ACM Talent and Lisa Lane Farmer and Mike Maas of CBS2/KCAL9 were the judges for our six finalists: Heather Foster, Jason Nuzzo, Aimee Gironimi, Chloe Dolandis, Josh Musser, and Jon Eric Preston.  The finalists were all exceptionally talented, and gave professional, poised readings, “cheered” on by the crowd in the live chat.  But, after some deliberation, the judges made their call and awarded the grand prize – which includes talent representation at ACM and a paid booking for CBS2 – to Chloe Dolandis.  Congratulations, Chloe!

The busy weekend came to a close on Sunday with our Speed Dating sessions (in both English and Spanish) and Atomic VO Coaching, a series of real-talk panels on the specifics of VO, with hourlong talks devoted to the specifics of Gaming and Animation, ADR and Dubbing, TV and Radio Commercials, TV Promos and Show Opens, Audiobooks, and TV and Corporate Narration.  Hosts Jessica Kent, Dave Walsh, and Adenrele Ojo called upon the expertise of panelists Dave Fennoy, Marc Grau, Mami Okada, Laura Stahl, Tina Morasco, Robin Armstrong, Joe Cipriano, Jodi Gottlieb, Scott Brick, Christina Rooney, J. Michael Collins, and Thom Pinto.  By the end of the day, attendees had raised their VO IQ and made connections with hosts and panelists as well as networked with each other in the live chat.  Hopefully, as we all return to recording in our solitary (and sanitary!) home booths and closets, life will be a little less lonely knowing that we’re all going through these challenging times together.

Meagan Brothers is the author of Debbie Harry Sings in French, a 2009 ALA Best Book for Young Adults, and its prequel, Supergirl Mixtapes.  Her most recent novel, Weird Girl and What’s His Name, was named one of Kirkus Review’s Best Teen Books of 2015.  Her poetry has appeared most recently in the Great Weather for Media anthologies Before Passing and The Other Side of Violet, as well as Persian Sugar in English Tea, and the Dada journal Maintenant. 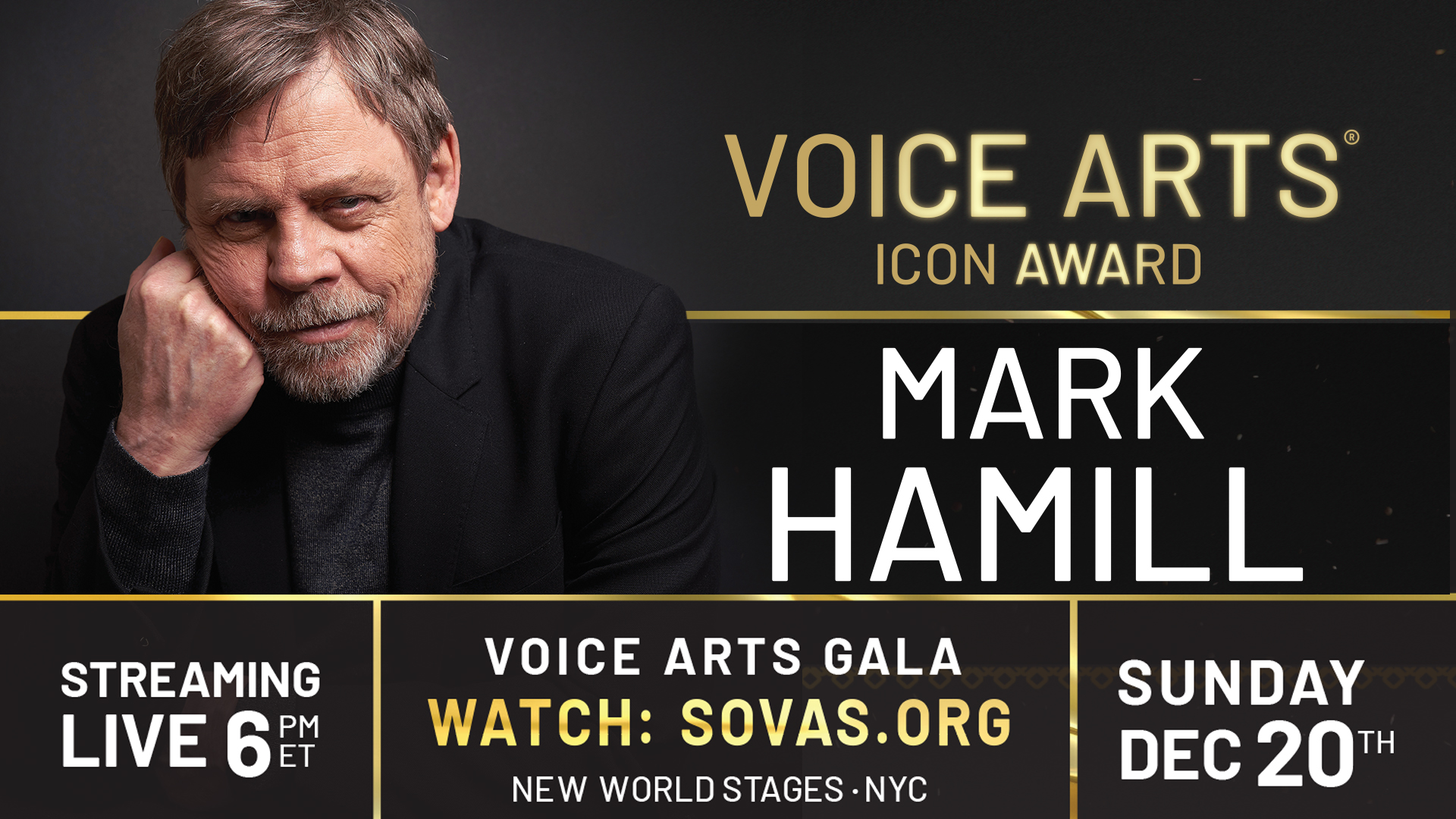