Wendel Bezerra, a voiceover artist in Sao Paulo, attained modest fame when he became the Portuguese-language voice of SpongeBob SquarePants a couple of decades ago. Then came jobs dubbing over Robert Pattinson and Edward Norton.

But the big breakthrough, he says, came a few years ago — when Netflix Inc. stepped up its efforts to woo viewers around the globe. Jobs started pouring in for him and his fellow performers. The number of inbound projects in the local market increased 30-fold, he says. He was invited for local talk shows and magazine interviews. He even got recognized at the shopping mall. “Dubbers are getting visibility,” he said through an interpreter. “I might be the most famous voice talent in Brazil.”

Bezerra shares his newfound popularity with dubbers in Barcelona, Paris and beyond. Voice artists around the globe, who’ve long filled a niche dubbing Hollywood VCR tapes or recording voiceovers for local TV, are now experiencing a surging demand as global streaming services including Amazon.com Inc.’s Prime Video, Walt Disney Co.’s Disney+ and AT&T Inc.’s HBO Max offer a broad range of programming from around the world in local languages.

At the forefront is Netflix. As it builds the world’s first truly global paid-TV network, the company has expanded its streaming service from the U.S. to more than 190 countries over the last few years. To satisfy viewers everywhere from Seoul to Buenos Aires, it needs to create localized versions of hundreds of different shows annually. In a push that’s become a priority for founder and Executive Chairman Reed Hastings, Netflix has established partnerships with more than 170 dubbing studios that produce programming in at least 34 languages.

No show evinces the rise of dubbing better than “Lupin,” a crime thriller based on a popular book series about a master thief. Filmed entirely in French, it became a huge hit at home. But it’s been an even bigger hit abroad, becoming the most-watched debut of any non-English-language series in Netflix’s history.

“Lupin” is the first French show to crack Netflix’s top-10 list in the U.S. Throughout February, nearly two months after its debut, it ranked among the 10 most popular shows on the streaming service in more than a dozen countries, including Austria, Croatia, Lebanon, Nigeria and Uruguay. All told, about 86% of those who watched the show on Netflix used subtitles or dubbing.

“Sometimes it’s a surprise to folks in Hollywood, but only about 5% of the world’s population speaks English natively,” said Brian Pearson, a vice president at Netflix in charge of creative services.

“There’s a growing audience of folks who are interested in watching shows and films with an English dub,” said Pearson. “They might be folding laundry, or their kids come into the room, and they don’t want to miss a plot point.”

Easy on the Eyes

Pearson just moved from Amsterdam back to California to oversee an organization within Netflix charged with making sure shows made in one language sound good in another, putting a spotlight on the quality of Netflix’s dubbing operations. “It’s something we’ve been doing for a while, and something we’re committed to improving,” he said.

Some markets have always preferred dubbing. In Brazil, Netflix’s largest market outside the U.S., the Portuguese-dubbed version of “Lupin” accounted for 89% of views. But the company says a growing share of its viewers everywhere are opting for voiceovers, which is easier on the eyes after a long day of work at a computer and lets the viewer multitask with a phone in hand. The number of people who watch dubbed versions of hits like “Lupin” and “Casa de Papel” is soaring in markets that have historically relied on subtitles.

As Netflix has expanded overseas, it acquired shows from Israel, Germany and France to release at home, and began producing more and more programs in languages other than English. Every year, the streaming service struck gold with a few foreign-language shows, including the Israeli thriller “Fauda,” the Japanese reality show “Terrace House” and the Danish political drama “Borgen.”

In the early days of its international expansion, Netflix was a foreign interloper with little knowledge of the best voice studios or actors in a given market. Sloppy translations led to monologues that sounded like someone was trying to speak like an American, instead of a Brazilian. Misuse of slang caused the viewer to fixate on how the words didn’t match the movements of the actors’ mouths, according to Bezerra in Sao Paulo. “There is some very strange dubbing,” he said.

Fixing dubbing became a major concern for Hastings, because it’s a key to the company’s future: Countries outside the U.S. account for 64% of the company’s customers, and 83% of new subscribers in 2020.

A message from SOVAS 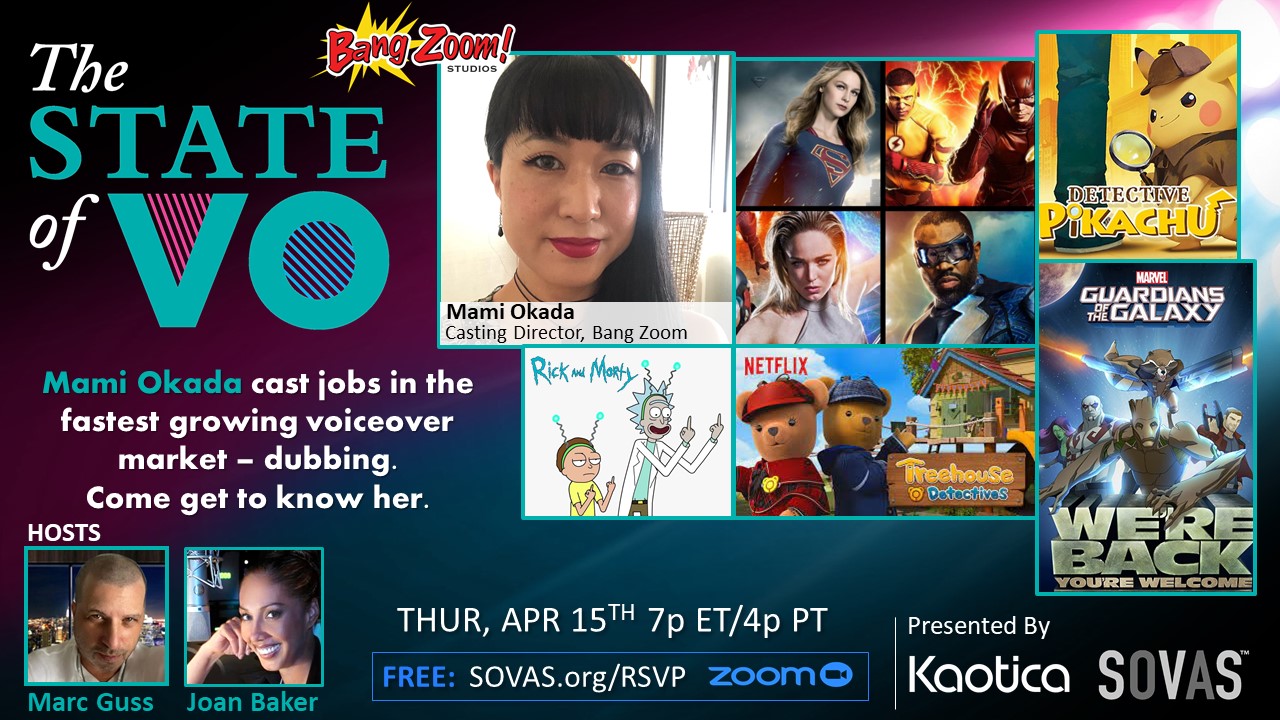 No Hollywood company has ever tried to dub at the scale of Netflix. Movie studios may do a handful of titles a year. TV studios sell foreign rights to big shows after they’ve become hits in the U.S., leaving months to sort out the dubbed versions. Netflix wants to release new shows every week in multiple languages at the same time.

To make that happen, Netflix has doubled its own dubbing operation, and it’s also mounting a global hunt for seasoned dubbers like Jose Posada.

Posada was 12 years old when he decided to become a voice actor. Sitting in a Barcelona dubbing studio, he watched his father, a former radio actor, overdub the voice of Obi-Wan Kenobi, the wizened Jedi in the first “Star Wars.” Though Posada had watched movies and TV shows from other countries at home, he had never stopped to think about the actors turning English or French into Spanish. “It was like a magic trick,” he said.

His turn as Chandler Bing on “Friends” led to jobs dubbing Adam Sandler and Matt Damon, establishing Posada as one of his country’s top voice actors. He said demand for his work picked up six years ago when Netflix entered Spain. While dubbing was once handled exclusively out of Barcelona and Madrid, studios have cropped up in Galicia, Valencia and the south of Spain to handle the extra work, he says. “When the platforms started, there was a boom,” Posada said.

Not surprisingly, these artists don’t get paid like the actors they dub over, or cash in like stars who voice animated features. The jobs are typically unionized and pay varies by country and job — in the range of several thousand to tens of thousands of dollars, depending on the gig.

Dubbing isn’t as simple as just repeating the words in the local tongue. The challenge for any voice actor is combining an effective translation with local flavor. Dubbers rely on writers who translate scripts and directors who adjust words and sentences to better match the movement of the character’s mouth. A one-syllable English word is probably better as one-syllable Spanish one. “It’s a good dub when you don’t think about it,” said Posada.

Netflix adds its own layer of quality control. The company tests studios before letting them into its network, and once they’re in, it gives feedback to help partners eliminate potential voice actors — hundreds of them, in the case of some animated films. When it comes time to record voiceovers, Netflix says it tries not to rush the studios, waiting for the proper cut.

Moves like those have made Brazil’s dubbing market more professional, said Bezerra, whose studio, UniDub, is one of three in Sao Paulo that work directly with Netflix.

Now, Netflix is replicating the infrastructure of Brazil and western Europe at home. The few Americans who watched international shows historically preferred subtitles, so as to hear the programs as they were intended. American actors, like American viewers, have long viewed voice work as a lesser art. But Netflix’s early success with foreign programming has inspired it to do more dubbing in the U.S. — and spurred Amazon, Apple Inc., HBO Max and Disney to follow suit.

A message from SOVAS

The pandemic sped Americans’ embrace of foreign-language shows. With many domestic studios pausing or halting production, the pace of new shows slowed for the first time in more than a decade, just when people were stuck at home with more time on their hands. Many Americans took a chance on programs from other lands. In the final quarter of 2020 alone, Netflix touted success with the German action series “Barbarians,” the Korean horror show “Sweet Home” and the bilingual show “Selena: The Series.”

That’s created more work for guys like Pete Dobson. The 56-year-old actor fell in love with movies at an early age, and moved to Los Angeles with dreams of becoming the next Paul Newman or Jimmy Stewart. He settled in as a journeyman thespian, booking roles in “Forrest Gump” and “CSI: NY.” He’d done dubbing, but only to correct mistakes in his own acting lines. A few years ago, he got a call from a director about providing a voice for Spain’s “Casa de Papel.”

“I was a little intimidated by it,” he said. “I saw the show and I basically said, ‘No, thanks.’”

But the experience was a revelation for Dobson — and not only because “Casa de Papel,” or “Money Heist,” became Netflix’s most popular Spanish show ever. Dubbing provides steady work, pays well and requires no travel. For actors looking to raise a family or spend less time away from home, it has become a go-to second job. Dobson’s work on “Casa de Papel” led to two more jobs with Netflix, including voicing the protagonist in “The Minions of Midas,” a new six-part Netflix series set in Spain.

Dubbing is a new challenge for an actor used to being surrounded by people on set. In one recent taping, Dobson was voicing a business tycoon named Victor, an awkward rich guy charming a journalist in a bar. With no one around but a reporter, Dobson had to flirt with a music stand. He mispronounced Madrid a few times (going with MAH-drid before landing on Ma-DRID), and struggled with the machine feeding him words in cursive, which is the preferred style in France. He turned to the director for advice on whether he should be sarcastic, and some of his character’s back story. After about a dozen tries, he settled on a line he liked.

“The hours are great. You can come in and wear a baseball hat and hide in a room for five or six hours. You try to do them justice in American as best as you can,” Dobson said. “It’s a ball doing this.”