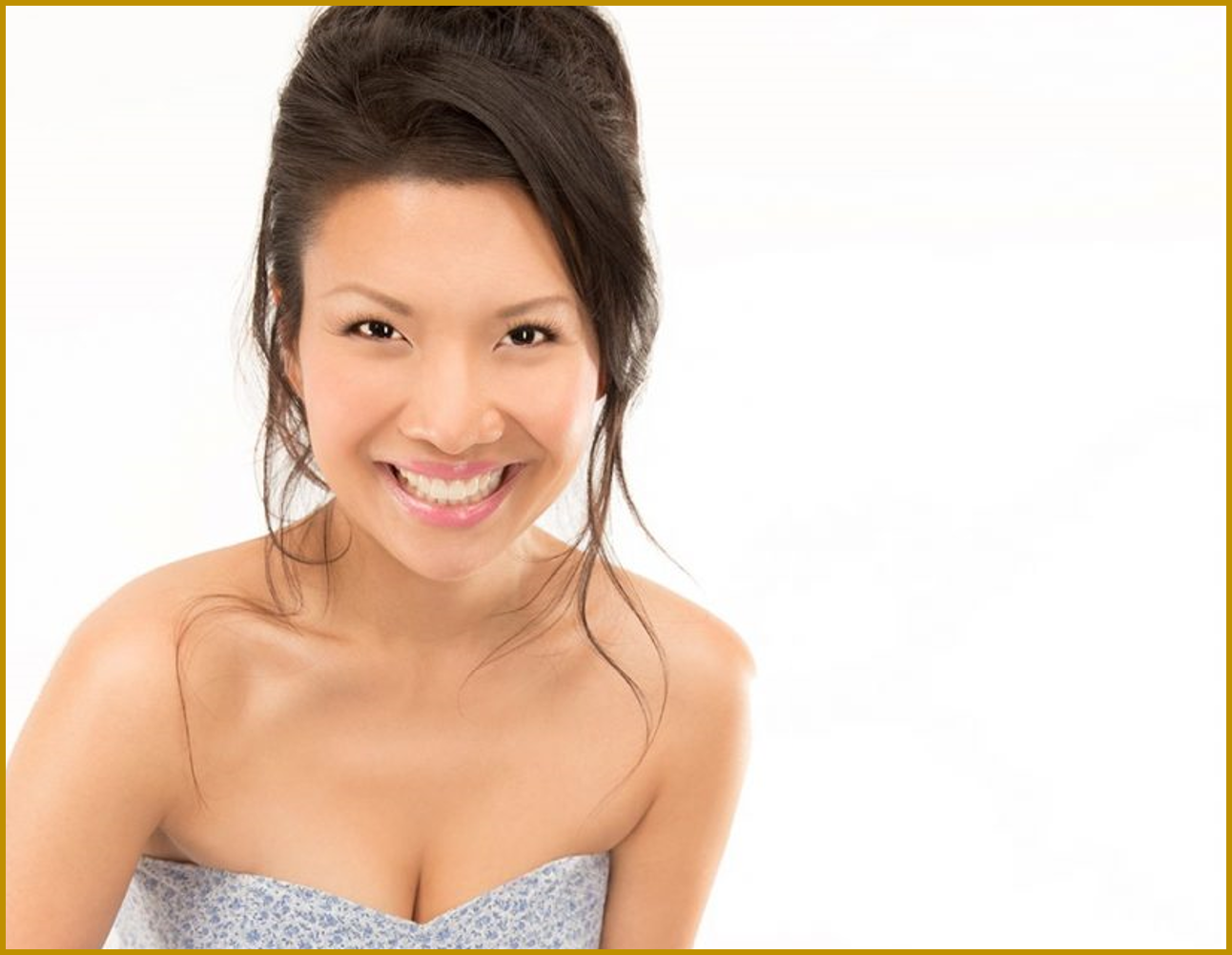 YVONNE: You’ve had success in many different areas of entertainment: voice acting, straight acting, music, and theater. Is this the universe in which you want to continue to play?

GWEN:  Yes absolutely. The acting universe is all encompassing. All these are acting venues and require skill that starts from the basis of truth and the ability to play. The beauty of being an actor is that each job is different. As a result, whatever the medium, I am never bored.  To be able to have success in a variety of areas is what any actor dreams about, but at the end of the day, it’s all about being courageous enough to venture into a career as a creative artist.

Is there a favorite among the different entertainment genres you’ve enjoyed?

GWEN:  For me, it’s not about genres. Sometimes it’s about skill, sometimes the role, sometimes the location I’m shooting at, or the cast or director I’m working with. I love on-camera and I love voice acting – it all just depends on the experience. I never want to limit myself. However, a great, deep, juicy role that makes an impact on someone’s life, is every actor’s dream .

Is there something completely different that you’d like to explore in the future?

GWEN:  I can’t talk about it in detail, however I’m working on a book at the present time and I’m very excited about it. Writing a book is quite different from the acting/performing world. 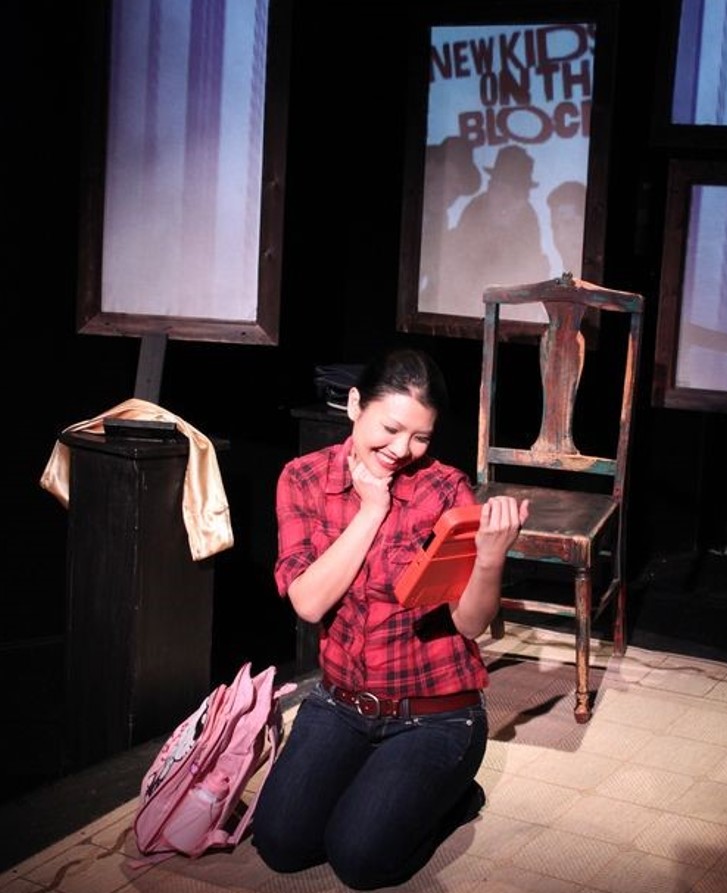 Gwendoline performs a scene from Laughing With My Mouth Wide Open*

The one woman show ‘Laughing With My Mouth Wide Open’ is both interesting and inspiring. It revealed a lot of problems that Asian teenagers face after they have immigrated to America. What advice would you give to them when facing these obstacles?

GWEN:  I would say to not throw the baby out with the bathwater when it comes to ones insecurities. Sometimes, your biggest achilles heel can be your biggest asset. For example, when I moved here, I had a Singaporean accent. People teased me, so I adjusted it to a British accent. I was teased about that, so I became a valley girl. This developed the dexterity of my tongue and an awareness of accents. It planted the seeds for a voice career to come. Furthermore, feeling like you don’t fit in, or belong, is something that is quite universal and you are not alone. Hollywood can be very much like a macrocosm of high school. Stay strong, and even if you are on the fringes, know that the pain you feel can sometimes bring you the best roles and even awards.
(See a video clip of  Gwendoline’s performance at the bottom of this page.)

As a Singaporean immigrant, what do you think are the advantages and disadvantages of being an Asian American in the entertainment industry in America?

GWEN:  I know people think that with Crazy Rich Asians, diversity casting has exploded. It has opened up, but the fight continues. People tend to forget that being Asian, we are “people of color.” Similarly so, sometimes not focusing on race, instead, trusting your talent, can be the best way to go.

Talk about about the Christian Appalachian Project in Lexington, Kentucky. What inspired you to get involved and how were you able to help? 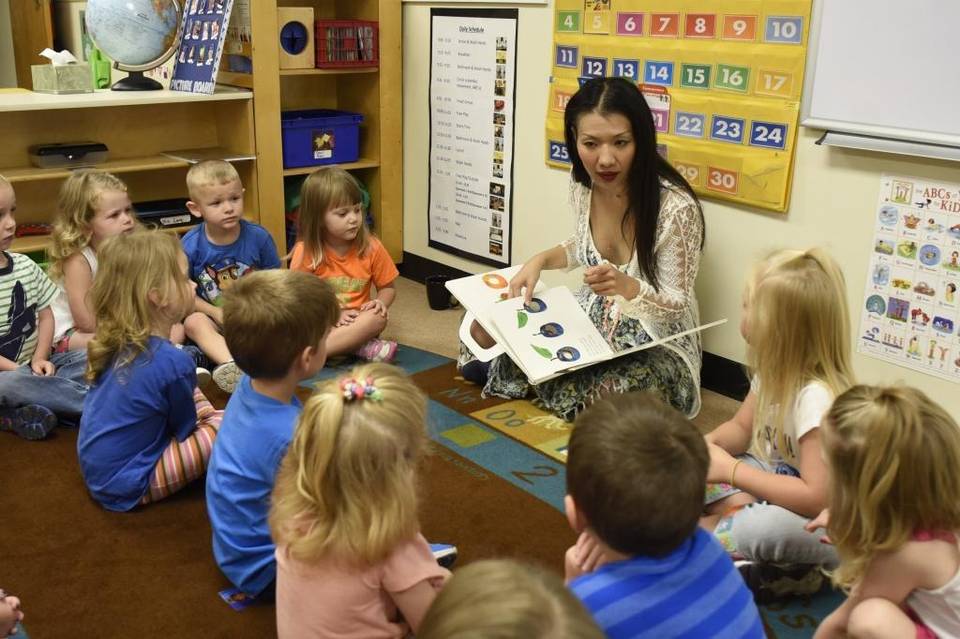 GWEN:  I was asked to create a limited edition clothing line for women and I decided I wanted to donate the profits to people in need. I saw a Diane Sawyer interview, in which she profiled the impoverished children of Appalachia, and my heart just felt called there. I did a speaking tour though the high schools and it was incredibly rewarding. I was able to connect with some of these kids who had an interest in voice acting and acting in general. I believe they felt a kinship with me being an outsider and they expressed that I gave them hope for themselves.

I read that you’ve been on a mission to visit every state in America . How has this impacted your life?

GWEN:  Traveling throughout the states gave me an awareness and connection with people whose paths I would never have crossed. I never truly understood the beauty of America’s topography and diversity – fly fishing in Montana, the breathtaking greenery of the Ozarks in Arkansas. I feel lucky and blessed to have had these experiences and they’ll stay with me forever.

You are very well known for being the voice of many popular anime and video game characters. Which one did you have the most fun doing? 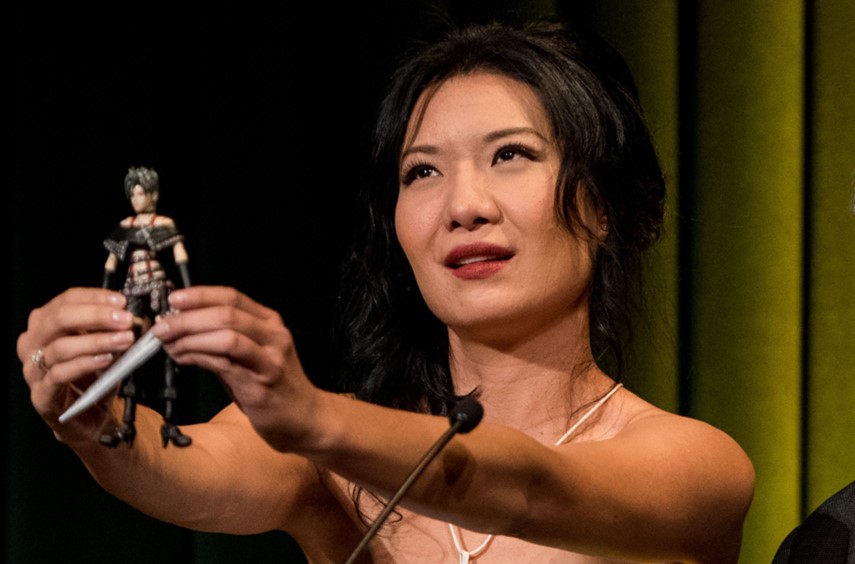 GWEN:  Working in animation and video games is always a fun experience. I love helping to bring the characters to life. Whether it be the restrained Nala Se in Star Wars Clone Wars, or the wry nature of Paine in Final Fantasy X2 or the kooky Shinigami in Teenage Mutant Ninja Turtles — each character has their own traits which I love giving voice to.

Is there a difference between voicing animation and voicing video games?

GWEN:  The techniques involved when recording animation vs. video games can be different. With animation, if you’re lucky, you record like a radio play and you interact with your cast. In video games, you’re in the booth alone. Furthermore, video games use motion capture, which is a different skill that is much more like theater acting. At the end of the day however, good acting is good acting.

How do you personally go about pursuing voice acting work?

GWEN:  My agents get me most of my gigs, and also after a time, people just know my work.

Among all the projects you have participated in, which one was the most challenging or unforgettable?

GWEN:  There are many, but one of the most unforgettable was in Socom 4 as Forty-Five where I was the first female lead ever, as well as being Asian American. That meant a lot to me. I worked on this project for over a year, including motion capture, with an incredible team and that was awesome. Another unforgettable role was being the lead in the Iron Man movie as Li Mei. I’m obsessed with The Marvel Universe. 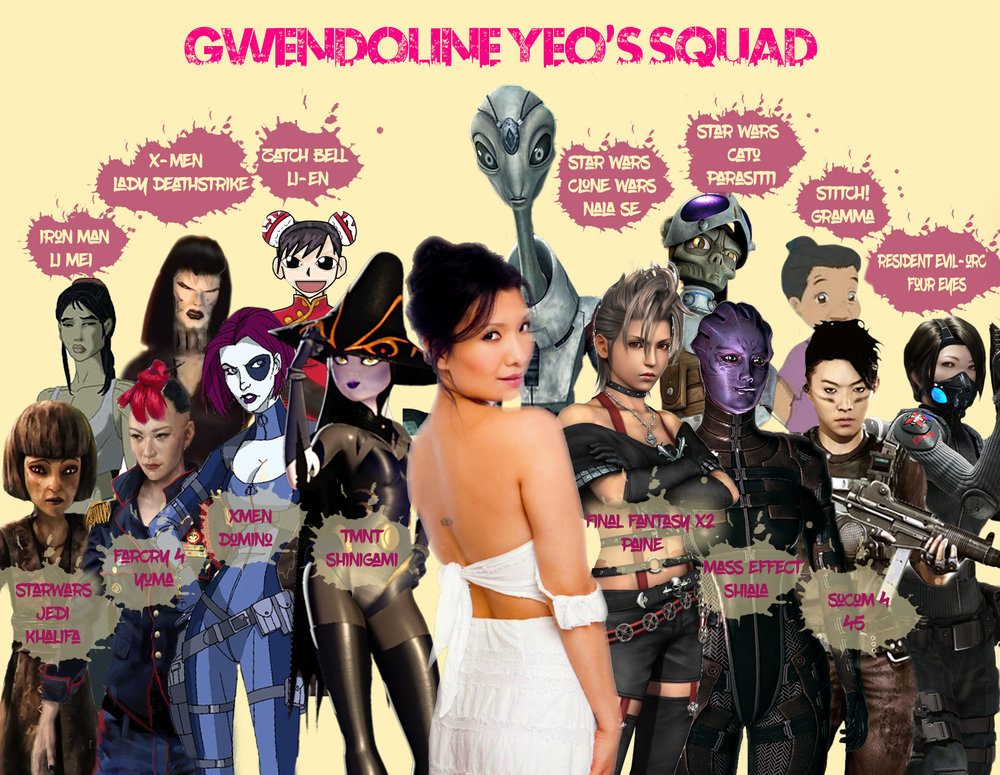 Gwendoline surrounded by a smattering of the many characters to whom she has given voice.

What have you learned about yourself throughout these years in Hollywood?

GWEN:  That I’m incredibly resilient and that I still surprise myself in my abilities to work across many acting platforms.

How did you come into voice acting? Did you have any role models that inspired you when you first started?

GWEN:  I was singing and playing in my jazz band. It just so happened that there were voice agents in the audience and they signed me after the show. Everybody’s story is unique – there’s no one direct route to take. However, be brave enough to do what you love, and always try your best, because you never know who might be watching or listening.

What advice would you give to someone who wants to become a voice actor?

GWEN:  Study and listen to the voices you like to hear. Figure out what makes someone’s voice appealing to you. And PRACTICE.

What is something you wish more people understood about you as a person and an actor?

GWEN:  I work really hard at what I do because I’m respectful of the process and am fortunate to make a living at what I love. Finally, I’ll tell you a little secret about me; I’m shy.

*An excerpt from Laughing With My Mouth Wide Open

Learn more about Gwendoline’s rising star, jump on over to her web site for more details. Plus follow, like, and love her on social media everywhere! 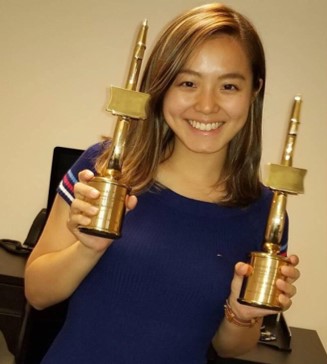 Yvonne Lam is a Summer Intern from Hong Kong, joining SOVAS through the Cross Cultural Internship Program operated by FUSIA Communications, Inc. She studies Accounting and Finance at The University of Hong Kong and has an interest in PR and Marketing.