Skip to content
Interview: Multi-hyphenate Eugenio Derbez on Voice Acting, Filming in Australia and a Grown Up Dora the ExplorerRudy Gaskins and Joan Baker2019-08-14T21:52:38-04:00

Interview: Multi-hyphenate Eugenio Derbez on Voice Acting, Filming in Australia and a Grown Up Dora the Explorer 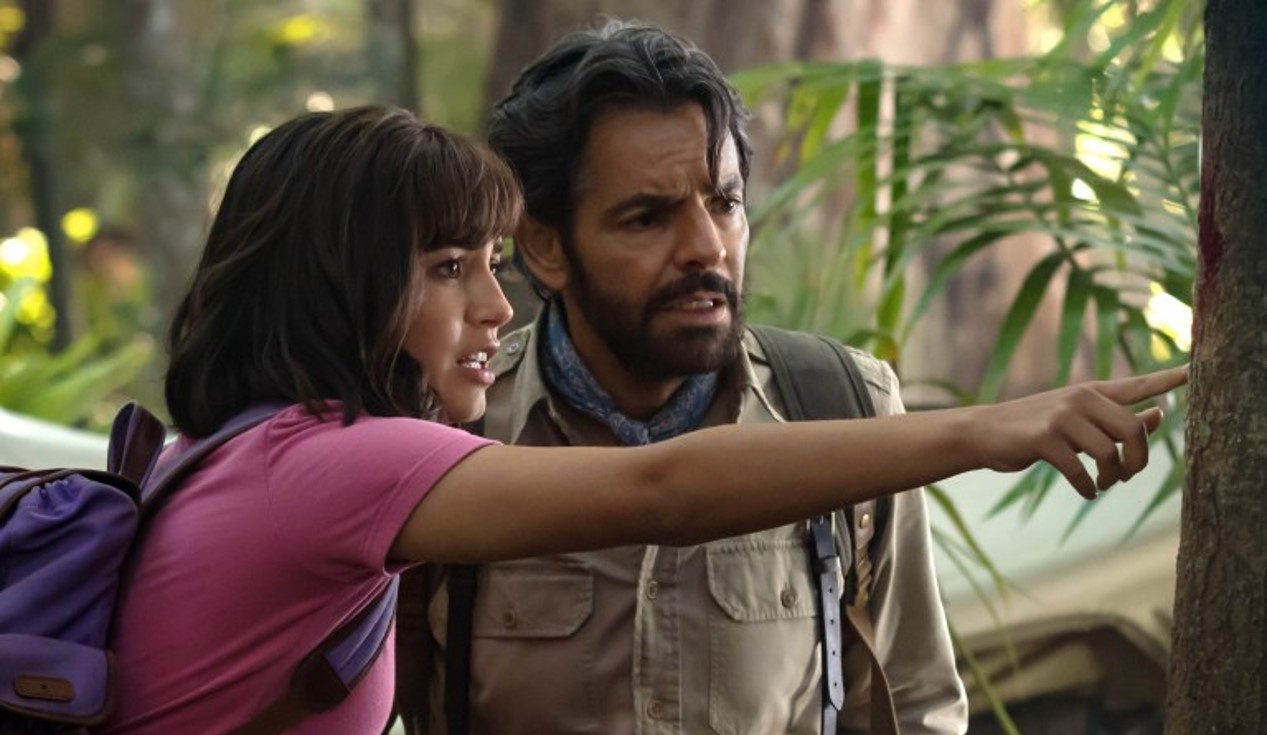 Two years ago, when I interviewed Eugenio Derbez, the Mexican-born superstar, a comedic actor-director-producer, I predicted that he would be well known far beyond the Spanish-speaking following that made his 2014 work Instructions Not Included the largest-grossing Spanish-language film ever in the United States. The film he was promoting in 2017 was How To Be A Latin Lover, Derbez’s first major step toward cross-cultural dominance that saw him headlining his first English-language film (with some Spanish thrown in for good measure), which blended the style of some of his previous works with a more American flair (with help from director Ken Marino and Selma Hayek playing his sister).

Since then, he has appeared in semi-serious works like hurricane disaster movie Geostorm; ridiculous comedies, such as the remake Overboard with Anna Faris; and one of Disney’s biggest bombs in recent memory, The Nutcracker and the Four Realms. But 2019 looks like a much better year for Derbez; he provides a voice in this weekend’s The Angry Birds Movie 2and stars in the family-friendly Dora and the Lost City of Gold, in which he plays a sketchy explorer/treasure hunter who assists a live-action Dora (Isabela Moner) and her new high school pals on a dangerous journey in search of a lost Incan city.

Derbez is a genuinely charming and funny guy, but as he creeps up on 60 years old and although I am genuinely curious to see if his Speedy Gonzales animated movie ever gets made, I’d love to see what he can do outside of broad comedies. We sat down in Chicago recently to discuss Dora and to see how his plan to build more of an American audience is going in the current political climate. Please enjoy my chat with Eugenio Derbez…

I remember when we met two years ago, you told me you were taking accent-reduction classes, which I never knew existed. Now that you’ve been through it, was there a particular word or phrase that was the hardest one to remove the accent from?

[laughs] All of them! There are many words that are difficult, especially when you need to speak faster. It’s really hard to nail it, but it’s interesting. For example, the word “example,” we would pronounce it one way because we see the ‘x’. But the teacher would say, “No, say it like you would ‘eggs’.” And it does sound different, but I’m getting there. And then there are times when a role requires a thicker accent, so I have to get rid of my accent-reduction classes.

I used to babysit kids who were obsessed with Dora, and their parents had every episode loaded up on the DVR, so I was very familiar with this character and her world going into this. What was your exposure to the series? Is “Dora the Explorer” an international phenomenon?

Yes, it is. At least in Mexico, my kids grew up watching Dora too, but it’s the opposite: she speaks Spanish and switches to English. Everyone loves Dora worldwide.

I love that the film is aware of how some of her behavior on the TV show would translate into the real world, like talking to the camera or being that positive and energetic. I didn’t realize until I saw the credits that James Bobin directed and Nicholas Stoller co-wrote it, both of whom helped bring the Muppets back. They have a real gift for making a kids’ format accessible to adults. Talk about working with them and what they brought to it.

I think they did an amazing job because the movie keeps the essence of Dora from the cartoon, but this is a different Dora. This isn’t the 8-year-old any more; now she’s a teenager, facing a new challenge—not the jungle, but high school, which is even worse. But she’s prepared because she’s been through so many things during her childhood. But it’s a new challenge for her. Now that she’s 18, the movie appeals more to a slightly older audience; it’s not just for kids. You can take your 6-year-old kid or teenager or grandmother—anyone—and you’ll have a lot of fun. James has an amazing sense of humor and he was always bringing jokes that were appropriate for the entire family.

You’re a producer on this as well. What did that entail? What was your role outside of just being an actor in this?

Basically, I was in charge of the Latino culture. For example, I did all of the Spanish dubbing; I was in charge of the script in Spanish; I assisted with part of the casting too, because I know all of the actors and didn’t want to make any mistakes, like having a Puerto Rican portray a Mexican, because we can tell the accents are different, and it would be a problem when the movie is shown in Latin America. I was always giving them some feedback about who they should cast, what was real and what was not in the Latino world. I helped with dubbing and did my own voice in Spanish.

With Latin Lover, you mentioned that some of the jokes in Spanish were translated differently into English to make the jokes better. Is there some of that going on here?

[laughs] Yes, a little bit. Because you can’t always translate literally because you’re going to miss a lot of jokes. So we tried to keep the essence of the script in English and when you switch to Spanish, if there was something that was not going to be understandable, you literally translate and change the joke to make it work in Spanish.

Were you involved with this film at the beginning?

Not at the very beginning, but almost—probably 20 percent of the early work was done by the time I cam on board. I’ve been very active, and me and my company try to get involved in any Latino project. I’m not the kind of person who feels he’s Mexican just because my mom and dad were Mexican; I was born and raised there; I’ve lived in Mexico my entire life, so I know the culture well.

For a brief moment in this film, you are animated; you’re in the Angry Birds Movie 2 next week; and you still have the Speedy Gonzales movie listed as an upcoming project. Is there any difference for you acting-wise in doing an animated work versus a live-action film? Do you get physical in the booth?

Absolutely. I learned while I was dubbing that you need to get physical, because when you’re dubbing a movie, you have to do everything with just your voice. When you’re acting, you have your face, your body, but when you’re dubbing something, it’s just your voice. One day, I realized I wasn’t getting what I wanted, and then I started moving and putting more energy, and everything changed. Now, I realized I need to act—I need to jump and move my face and hands, and you deliver the text in a different way. So it’s exhausting, honestly, but if you act, your voice sounds different. I really act when I’m doing voice work or dubbing.

I’ve heard from other people I know who have done animated voice work that you don’t break a sweat, you aren’t doing it right.

The animated Dora series is primarily about education, but this film is about bigger life lessons. It’s about how to get along with other people and what to do when you stand out in a way that people might make fun of you. What do you think some of the big differences are?

You’re completely right. This isn’t just about learning words and phrases. One of the most important messages that this movie has is that Dora doesn’t fit into society at the beginning. When she arrives at high school, she’s like a different animal in the jungle. Instead of trying to fit in, which is what every single kid wants to do, Dora stays true to herself, and I think that’s the best message the movie has. If you stay true to yourself, you’re not going to betray yourself. So she succeeds in the end because everybody knows that she’s different, and they love her for it. She doesn’t change her inner self just to fit in.

You shot most of this in the wilds of Australia. I’ve heard that some parts of this were genuinely dangerous. Can you talk about some of the dangers?

It was crazy. We were in the middle of the jungle, and somebody told us that eight of the deadliest spiders in the world were in Australia and nine of the most deadly snakes were too. And we were shooting right in the middle of the jungle, and I remember a lot of people from the production telling me “You’re going to go in the cane field. Just don’t let your arms or legs get out of the car, because there are snakes in there that can kill you in two minutes.” There is no way you can survive or get a shot or anything. So I was like “Are you kidding me? Why are we shooting under these conditions?”

[laughs] But that’s the magic of the real jungle. I remember one day, I was changing in a tent in the jungle, and was putting on a shirt, and suddenly I saw a spider crawling up this chest of the woman who was giving me my shirt, so I told her to hold still and I brushed it off of her, and she saw the spider and said, “Oh my god, you saved my life.” I remember the name: a white-tailed spider, which is a very poisonous spider. We were working under those conditions. Even when we were resting in a tent, every three minutes, we were checking our chairs and taking care of each other.

I feel like I can see that fear on the faces of many of the actors.

Oh, absolutely. There’s a scene when we’re running from arrows. In that scene, there’s one moment when one of the girls saw a snake while she was running, and she was really running and shouting like crazy, and it was really scary.

Isabela has been front and center of a lot of big movies lately. What is it about her that is special, and what was it like working with her?

I liked everything about working with her. I think Isabela is going to be a huge star, huge. Her potential is amazing. First of all, she’s an amazing human being, a great person, a good soul, and she’s very talented. She’s an amazing singer, and I was asking her the other day, “Are you more into singing or acting?” And she said, “Definitely singing. I’m probably going to stop acting for a bit to sing more.” She’s a great dancer. She can do drama, comedy. We are developing a project for the future, so we’ll see if that happens.

Best of luck with this and everything.

Good seeing you again. Thank you.